“Crossing will devour you; this is some fierce, dazzling, and heartbreaking shit.”
— NoViolet Bulawayo, author of We Need New Names

“Reading Pajtim Statovci’s fiction is like entering a lucid dream: life and death intertwines in an intimate dance; the nostalgia for the past is akin to the nostalgia for the future. Crossing is a novel that dazzles and mesmerizes, and the reader, upon finishing, may have the extraordinary sensation that his or her own dreams have been scattered along the journey, beckoning for rereading. “
— Yiyun Li, author of Where Reasons End

“Anyone who has ever known what it’s like to leave home in pursuit of happiness and belonging will most likely love this tender, beautiful novel as much as I did.”
— Imbolo Mbue, author of Behold the Dreamers

“Everything, and I mean everything, is threatened with devastation and loss, but Pajtim Statovci’s prose, the quality of his seeing and remembering, promises to save an invaluable part for all of us.”
— Amitava Kumar, author of Immigrant, Montana

A stunning, incandescent novel that speaks to identity, war, exile, love, betrayal, and heartbreak
The death of Enver Hoxha and the loss of his father leave Bujar growing up in the ruins of Communist Albania and of his own family. Only his fearless best friend Agim–who is facing his own realizations about his gender and sexuality–gives him hope for the future.
Together the two decide to leave everything behind and try their luck in Italy. But the struggle to feel at home–in a foreign country and even in one’s own body–will have corrosive effects, spurring a dangerous search for new identities. Steeped in a rich heritage of bewitching Albanian myth and legend, this is a deeply timely, deeply necessary novel about the broken reality for millions worldwide; about identity in all its complex permutations, and the human need to be seen. Find on Amazon, Barnes & Noble, Indiebound, Bookdepository, Adlibris, Books-a-Million,Goodreads.

“… packs a devastating punch: it is the work of an accomplished novelist. The book expands and complicates Statovci’s central theme of youthful revolt – against conventional belonging, pre-determined identities, nationalities, families, origins, against life as a tyranny foretold … The book is alive with such wonderful gothic scenes, a visceral sense of alienation and desire. With considerable literary panache, Statovci treads a line between raw tragedy and a more formal aesthetic of abjection bordering on existential horror, in the best European literary-philosophical tradition from Camus to Kafka, Kadare to Kristeva. The sensitivity and poetry of David Hackston’s translation match the original … Statovci’s brilliance is primarily as an intuitive storyteller, though there is the occasional overdose of narcissistic misery … finds new ways of bringing the question of who belongs, and who is cast out, to an exquisitely painful point … The brutal beauty of Crossing comes from its almost cellular understanding of belonging and exclusion, love and cruelty. It is a powerful phoenix of a book that rises from the ashes of the previous century. It speaks to the sins of the fathers, which the children must transcend by crossing to the other side – or perish.”
— The Guardian, UK

“Statovci’s refusal of the satisfactions of character is central to the book’s larger concerns. Crossing, in its rejection of fixed notions of identity, has a kind of kinship with recent books by other young queer writers, among them Andrea Lawlor’s Paul Takes the Form of a Mortal Girl, with its joyfully shape-shifting hero/ine, and Akwaeke Emezi’s Freshwater, which features a protagonist who moves between genders, inhabited by the spirits of West African myth … I thought of Genet often as I read Statovci’s novel; Bujar, in his voluptuous lying and his disruption of others’ lives, rivals any of Genet’s outlaws. But a more helpful antecedent may be another queer criminal: Patricia Highsmith’s Tom Ripley … Statovci’s writing at its best…[has] longing and rage compressed in a single sentence at once sweepingly plangent and rooted in granular detail … Statovci’s critique of identity politics takes a heavily satirical hand. Bujar consistently rejects collective identities, from the classification of refugees as ‘barbaric’ to the liberal championing of minorities. But Crossing is equally ruthless in its critique of the heroic individualism … The novel memorably portrays the pain…labels can cause; it also suggests that we may not be able to live without them.”
— The New Yorker, US

“Despite its modest length, Crossing is nothing less than the tale of human existence: of how we construct ourselves, how that changes as we try to fit ourselves to the changing world around us, and the price we pay… a tale of desperation and survival … a melancholy account of displacement and disappointment … This description of spiritual desolation points to the novel’s larger theme … The crossing from one identity to another requires the constant abandonment of who and what you were and living largely in a state of flux—what Buddhists call a bardo, the disorienting and rootless interval between one life and the next in the unending cycle of reincarnation … Crossing is a challenging and brilliant work of fiction.”
— The New York Journal of Books, US

“… part of what makes Crossing unpredictable is how swiftly horror replaces laughter … Statovci’s writing is slyly artful … It’s in keeping with the novel’s studiously non-binary logic that Bujar isn’t a straightforwardly sympathetic narrator … Added complexity comes from how his time-hopping casts doubt over quite how he got to Italy in the first place. That question keeps you reading even when you feel daunted by his gruelling narrative. The answer is a shock, but one that befits the harsh perspective on show in this cruel odyssey.”
— The Observer, UK

“… timely … In a deft narrative that splices both voices with myriad backdrops – Berlin, New York, Madrid, Rome and Helsinki – Statovci tells a quietly subversive tale that seeks to highlight the devastating effects of shame … Unlike many contemporary novels, the dual narratives here support each other and each feels rounded and distinct. Statovci is particularly good at writing loss … full of insights and thought-provoking reflection … Statovci writes sensitively of his topics, in clear, vivid prose … The backdrops of the novel all come easily to life.”
— The Irish Times, UK

“This intense and captivating book … [offers] a strong character study and a larger look at society … An excellent and evocative novel about intersection of migration and gender.”
Library Journal *Starred Review*, US

“…sad and searching … Statovci uses no magic-realist elements here, and with its stark language, unanswered questions, and unrelenting heartbreak, this may be the more poignant of his powerful novels.”
Booklist, US

“…disorienting but affecting … [a] shocking conclusion … The matter-of-fact depiction of numerous traumas intensifies the impact. Statovci memorably portrays the struggles and dislocations of his complicated characters.”
Publisher’s Weekly, US

“Pajtim Statovci’s second novel exceeds all expectations. /…/ Crossing is a fantastic novel, at once incredibly tragic and highly critical. Statovci addresses problems and deep emotions. The novel draws you in and never ceases to thrill, the narrative is beautifully rhythmical, both soft and beating at times.”
Turun Sanomat, Finland

“Crossing stirringly describes how cruel and brutal life can often be. /…/ The narrative is skilful and ethereal. This novel is an entertaining and captivating piece of art. Born in 1990, Pajtim Statovci writes world-class literature.”
Talouselämä, Finland

“Tirana’s pulse beats in the novel, in all its darkness and in the most vivid of fashions. /…/ The novel’s journey ends in Tirana, and with a confrontation with the past that gives the work even further depth. Statovci is again at his best.”
Helsingin Sanomat, Finland

“An ambitious and bold author… the portrayal of Bujar’s father’s illness and death is one of the best I have read both in terms of details and insight in the end: I will never forget what a dead man looks like, that a dead body looks as though nobody has ever lived in it. Think that Pajtim Statovci was 26 years old when he wrote CROSSING and the following: They still cautiously peer over their shoulders as they walk, as though wishing that the past staring back at them was not their own.”
Sydsvenskan, Sweden

“Pajtim Statovci’s debut novel My Cat Yugoslavia was an instant success, and his second novel, Crossing, is again a work of quality. /…/ It has everything a truly great novel should have along with a vision and a point of view that leaves room for interpretation.”
Suomen Kuvalehti, Finland

“When talking about Statovci, one can only admire the depth and clarity of his thoughts, how skillfully he composes his sentences and how astonishingly well he writes about something so beyond his young age, such as death. /…/ When I finally found something to compare Pajtim Statovci’s magnificent new novel to, it was L’Étranger by Albert Camus, of course.”
Kainuun Sanomat, Finland

“The best-selling author’s second novel is a home run. Crossing is just as impressive as the award-winning debut novel. /…/ [Crossing is] a tragic and heartfelt novel that shows just how wisely and originally Statovci writes about big themes, such as nationalism, gender and shame.”
Me Naiset, Finland

“Pajtim Statovci twists and bends the dilemma of trans from many angles and aspects, often downright concrete but sometimes with a sense of lyrically visionary stringency, an attempt to capture love’s innermost essence beyond all the gender restrictions.” – – “Pajtim Statovci is a young and evidently accomplished author…” – – “It shall be extremely interesting to follow him.”
Aftonbladet, Sweden

“Wisdom flows from between the lines, maybe even some answers. /…/ Even though the story of an endless wanderer is dark, a statement of modern day Finland, it inevitably directs the reader’s point of view to history and what it means to be a European.”
Aamulehti, Finland

“An eye-opening portrayal of legal injustices, inequality, and lost souls. And of encapsulated love, unbreakable bonds, and the power of myths.”
Viva, Finland

“Crossing is a beautiful and tragic novel about pervasive otherness and the subjectivity of truth.”
ET, Finland

“As was the case with Pajtim Statovci’s debut novel, one can only admire the writer’s ability to form perfect sentences when reading Crossing. /…/ The young author’s storytelling is fluent and flows. The places he will go!”
Le Monde Diplomatique, Finland

“Even at the end awaits a twist that sheds new light. Crossing is a great and powerful novel that will bring the reader to a halt. Not least with its very topicality.”
Parnasso, Finland

“Crossing is ferociously earnest, an eminently written story of the troubles in the Balkans, the difficulty of loving, and the right to define oneself.”
Keskisuomalainen, Finland 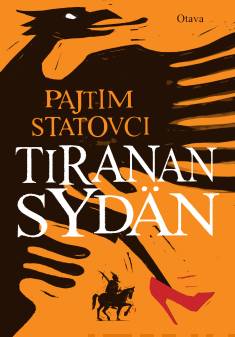